Small wind electric systems are one of the most cost-effective home-based renewable energy systems. These systems are also nonpolluting.

If a small wind electric system is right for you, it can do the following:

Small wind electric systems can also be used for a variety of other applications, including water pumping on farms and ranches.

Wind is created by the unequal heating of the Earth's surface by the sun. Wind turbines convert the kinetic energy in wind into clean electricity.

When the wind spins the wind turbine's blades, a rotor captures the kinetic energy of the wind and converts it into rotary motion to drive the generator. The manufacturer can provide information on the maximum wind speed at which the turbine is designed to operate safely. Most turbines have automatic over speed-governing systems to keep the rotor from spinning out of control in very high winds.

A small wind system can be connected to an electric distribution system (grid-connected) or it can stand alone (off-grid).

Most small wind turbines manufactured today are horizontal-axis, upwind machines that have two or three blades. These blades are usually made of a composite material, such as fiberglass.

The turbine's frame is the structure onto which the rotor, generator, and tail are attached. The amount of energy a turbine will produce is determined primarily by the diameter of its rotor. The diameter of the rotor defines its "swept area," or the quantity of wind intercepted by the turbine. The tail keeps the turbine facing into the wind.

The wind turbine is mounted on a tower to provide better access to stronger winds. In addition to the turbine and tower, small wind electric systems also require balance-of-system components.

Small wind energy systems can be connected to the electricity distribution system. These are called grid-connected systems.

A grid-connected wind turbine can reduce your consumption of utility-supplied electricity for lighting, appliances, and electric heat. If the turbine cannot deliver the amount of energy you need, the utility makes up the difference. When the wind system produces more electricity than the household requires, the excess is sent or sold to the utility.

With this type of grid-connection, note that the wind turbine will operate only when the utility grid is available. During power outages, the wind turbine is required to shut down due to safety concerns.

Grid-connected systems can be practical if the following conditions exist:

Federal regulations (specifically, the Public Utility Regulatory Policies Act of 1978, or PURPA) require utilities to connect with and purchase power from small wind energy systems. However, you should contact your utility before connecting to its distribution lines to address any power quality and safety concerns.

Your utility can provide you with a list of requirements for connecting your system to the grid.

Wind Power can be used in off-grid systems, also called stand-alone systems, not connected to an electric distribution system or grid. In these applications, small wind electric systems can be used in combination with other components—including a small solar electric system—to create hybrid power systems. Hybrid power systems can provide reliable off-grid power for homes, farms, or even entire communities (a co-housing project, for example) that are far from the nearest utility lines.

An off-grid, hybrid electric system may be practical for you if the items below describe your situation:

In addition to purchasing photovoltaic panels, a wind turbine, or a small hydro power system, you will need to invest in some additional equipment (called "balance-of-system") to condition and safely transmit the electricity to the load that will use it.

The amount of equipment you will need to buy depends on what you want your system to do. In the simplest systems, the current generated by, for example, your wind turbine is connected directly to the load. However, if you want to store power for use when your turbine isn't producing electricity, you will want to purchase batteries and a charge controller. Depending on your needs, balance-of-system equipment could account for half of your total system costs. Your system supplier will be able to tell you exactly what equipment you will need for your situation.

Charge controllers regulate the electricity flowing from the generation source into your battery or load. Photo credit: Harin Ullal

Many controllers will also sense when loads have taken too much energy from batteries and will stop the flow until sufficient charge is restored to the batteries. This last feature can greatly extend the battery's lifetime.

The cost of controllers generally depends on the ampere capacity at which your renewable system will operate and the monitoring features you want. 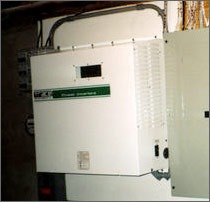 Inverters condition electricity so that it matches the requirements of the load. Photo credit: Trudy Forsyth

There are four basic elements to power conditioning:

Simple electric devices, such as hair dryers and light bulbs, can run on fairly low-quality electricity. A consistent voltage and smooth sine curve are more important for sensitive electronic equipment, such as computers, that cannot tolerate much power distortion.

A series of requirements for grid-interactive inverters have been developed by Underwriters Laboratories, a leading safety-testing and certification organization. These requirements, referred to as UL 1741, apply to power-producing stand-alone and grid-connected renewable energy systems. Either you or your installer should contact your power provider to see which models they accept for grid-connection; most simply require a grid-interactive inverter listed by an organization such as Underwriters Laboratories.

The cost of inverters is affected by several factors, including:

When you size your inverter, be sure to plan for any future additional loads you might have. It is often cheaper to purchase an inverter with a larger input and output rating than you currently need than to replace it with a larger one later.

Batteries store electricity for use during times that your system is not producing electricity due to resource unavailability. Batteries are most effective when used in wind and photovoltaic systems (variations in hydro resources can be more seasonal in nature, so batteries may be less useful). 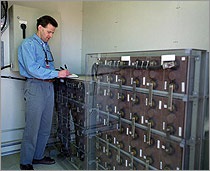 Batteries store the electricity produced by your small renewable energy system for later use.

The "deep-cycle" (generally lead-acid) batteries typically used for small systems last five to ten years and reclaim about 80% of the energy channeled into them. In addition, these batteries are designed to provide electricity over long periods, and can repeatedly charge and discharge up to 80% of their capacity. Automotive batteries, which are shallow-cycle (and therefore prone to damage if they discharge more than 20% of their capacity), should not be used.

The cost of deep-cycle batteries depends on the type, capacity, climate conditions under which they will operate, frequency of maintenance, and chemicals used to store and release electricity. Wind or photovoltaic stand-alone system batteries need to be sized to store power sufficient to meet your needs during anticipated periods of cloudy weather or low wind. An inexpensive fossil fuel-powered back-up generator can be used to cover unanticipated or occasional slumps in the renewable resource.

For safety, batteries should be located in a space that is well ventilated and isolated from living areas and electronics, as they contain dangerous chemicals and emit hydrogen and oxygen gas while being charged. In addition, the space should provide protection from temperature extremes. Be sure to locate your batteries in a space that has easy access for maintenance, repair, and replacement. Batteries can be recycled when they wear out. 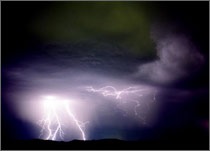 Here are the major safety features your system will need:

Automatic and manual safety disconnects protect the wiring and components of your small renewable energy system from power surges and other equipment malfunctions. They also ensure that your system can be shut down safely for maintenance and repair. In the case of grid-connected systems, safety disconnects ensure that your generating equipment is isolated from the grid, which is important for the safety of people working on the grid transmission and distribution systems.

This equipment provides a well-defined, low-resistance path from your system to the ground to protect your system against current surges from lightening strikes or equipment malfunctions. You will want to ground both your wind turbine or photovoltaic unit itself and your balance-of-system equipment. Be sure to include any exposed metal (such as equipment boxes) that might be touched by you or a service provider.

These devices also help protect your system in the event that it, or nearby power lines (in the case of grid-connected systems), are struck by lightening.

Meters and Instrumentation for Stand-Alone Systems 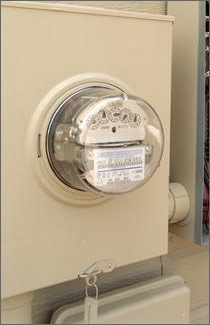 Meters and other monitoring equipment help you keep track of how your system is performing.

Meters and other instruments allow you to monitor your small renewable energy system's battery voltage, the amount of power you are consuming, and the level at which your batteries are charged, for example.

Power providers that don't allow such a net metering arrangement require that you install a second meter to measure the electricity your system feeds into the grid. 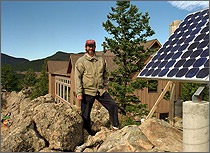 Stand-alone systems can be more cost-effective than connecting to the grid in remote locations.

For many people, powering their homes or small businesses using a small renewable energy system that is not connected to the electricity grid—called a stand-alone system—makes economic sense and appeals to their environmental values.

In remote locations, stand-alone systems can be more cost-effective than extending a power line to the electricity grid (the cost of which can range from $15,000 to $50,000 per mile). But these systems are also used by people who live near the grid and wish to obtain independence from the power provider or demonstrate a commitment to non-polluting energy sources.

Thank you for your submission.

There was a problem with your submission.

There was an error with your submission.

Apply for Financing
Schedule an Appointment 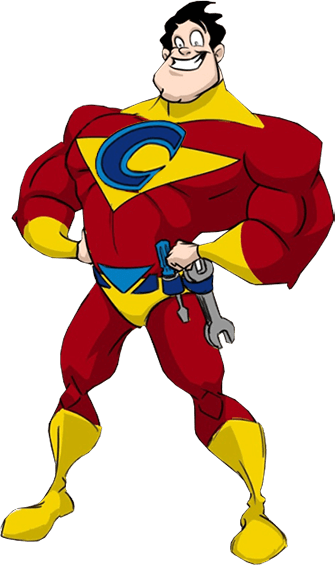